What a day! Session 10 of 10 at Chester County Prison in West Chester, PA, where I collaborated with the Wellness Action Recovery Plan (WRAP) Facilitator, La Vonne Alexander (LVA),  to develop a special pilot program for 15 female inmates. This weekly  class filled up quickly and because some people were released or left the program, others took their spots. So even though we had a full classroom, we didn’t always have the same participants. Still, this was an excellent way for us to “plant a seed”.

I must also clarify, that while I hoped to introduce the benefits of  Laughter Yoga,   I was asked if I could focus on breathing exercises and mindfulness mediation. Prison officials  were understandably concerned about any exercises, which would cause too much movement or incite rowdiness. We met in an enclosed classroom (which offered us quiet) but which had windows looking into the hallway and cameras.  LVA was in the classroom at all times but allowed me to take charge of the session.

For each gathering, I wrote a welcome message on the whiteboard and filled it with uplifting quotes and class information. The tables were pushed aside and the chairs were moved to create a circle.  As the inmates filed in, they helped us to finish setting up the room to the sound of some relaxing sounds playing on our CD player. I was allowed to bring in some music. All inmates were to remain seated during the session and no touching allowed.

Keeping these limits (but by no means limitations) in mind, I readily agreed to lead breathing exercises and to focus on mindfulness meditation, which I was familiar with because I include them in my Laughter Yoga work. Honestly, I was just thrilled to finally get my foot in the door. I had been trying for over a year to get into the place and I was eager to learn more about working with this demographic of women from many backgrounds which  I had no previous experience with. My goal was to teach them some practical skills on how to get through challenges in their life and to coach them into making better choices for themselves in the future.

This volunteering project combining the already established WRAP program (which took place on the other weekdays) with my  B.SMART  (Breath work, Stress Reduction, Mindfulness Meditation, And, Resilience, Training).  I was given a lot of freedom to develop the sessions organically and also added music (recordings of music and songs ) as well as some playful activities which encouraged laughter, such as a Laughter Yoga body warm-up called: ” HI, HO, HA, HEE, YAY!”and exercises that promoted positive body image and resilience. “I love my body!”,”I/you/we  am/are beautiful”, “This little light of mine…”, positive affirmation and the “lotus flower” exercise. We practiced being more playful and celebrating the little things. Cultivating your inner joy is always a big theme with me.  We “conducted a symphony” to classical music, listened to recorded birdsong and chair-danced. We learned to open our hearts and to focus, to pay attention and to listen to our breath and the rhythm of our heartbeats.

Some didn’t know what to make of these exercises in the beginning and felt awkward and inhibited participating but soon into the program, they were asking to do them and even reported practicing some of these exercises with their cellies. The body warm up exercise became one of our favorites. They welcomed every opportunity to laugh.

At the beginning, I had no idea what to expect. I felt that the participants  were just happy to be out of their cell blocks and might not be really interested in what I had to share. Frankly, I was a bit worried about how I would be perceived, coming in there with my ideas and also, not really understanding where they were coming from. I mentally prepared myself to be challenged by a “tough” group. However, they were very respectful and good listeners.

I soon realized that once they got to know me and trust me, that they opened up and became talkative and they asked all kinds of questions, which led to interesting talks.

As we worked through an exercise called “Who Am I?”, which focuses on how we feel and perceive ourselves and also how we may label others. I wanted to shock them into a laugh and figuring that the participants could easily perceive me as a “PSAWB” (Privileged, Skinny-Assed, White Bitch), it did cause them to chuckle in an embarrassed way.  Quickly, we  gave ourselves names/identities  and also discussed how they can  quickly change and/or evolve over time, as in the “Law of Impermanence”, (Everything is ever changing, nothing stays the same.”) I also encouraged them to expand upon this process in written form. Many have been engaged in journaling.

With each visit, I mindfully left judgement at the door and entered with an open heart and attitude, being willing to listen but also very enthusiastic to reach out and share ideas. After all, I was following the POF program,  https://www.prisonmindfulness.org/projects/path-of-freedom/, which gave me all kinds of tools to work with and I was eager to use them, grateful that I had discovered this program at the onset of my prison project. This was serendipity and divine intervention combined.

I was amazed at how well each session went, with the majority of the participants eagerly sharing their stories and ideas and readily participating in the discussions. Many were eager to read certain passages from our materials out loud. Some were a bit shy and quiet but as we moved ahead with the program, they became bolder and began to relax and soak up the information. I could see participants returning ( but also some leaving due to detentions, releases or choosing to go to Chapel instead). In the end, we had only one person attend all of the sessions and three others who attended over half of the sessions.

Prisons are noisy and unpredictable environments where it is not easy to find a quiet corner to meditate. Still, some of my group would report back to me that they were developing their practices. As we made our way through the POF materials, our participants would share how they were “Holding their Seats” when feeling triggered or distracted and how they were managing their emotions better in the process. We discussed how not to get caught up on the “Drama Triangle” and how to avoid “Climbing the Ladder” to avoid conflict. Each chapter in our POF manual gave us such good exercises to work with and the participants responded well to the prompts and ideas. It was also fun to pair people up and create scenarios.

Today, we celebrated the 10th session and  four women received recognition for their attendance. They each led a brief presentation, explaining what they learned from the program and I was blown away by their thoughtful and kind words and how they each explained what they learned and were able to put into practice from our sessions.

Below, an example of one of the certificates created for the honorees.

This moved me to tears. This is what one of the participants shared about the B.SMART program: 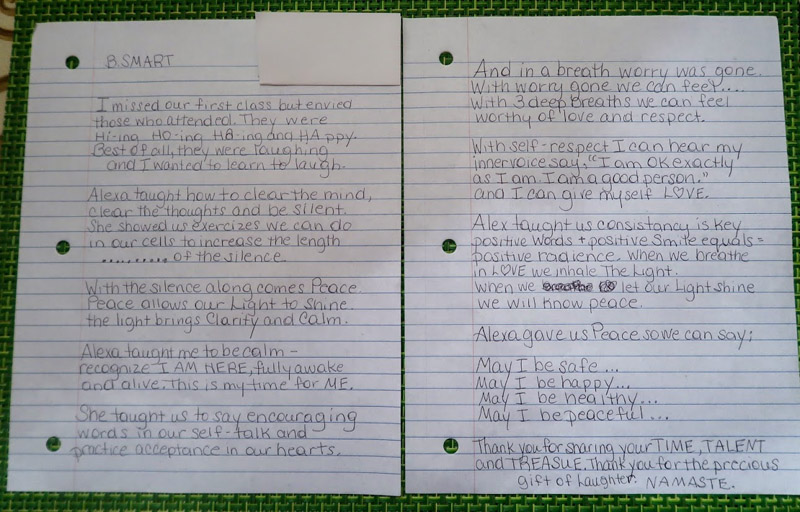 All of the women collaborated on this poster for me and left such nice messages:

Try to avoid getting onto the “Ladder of Conflict”. 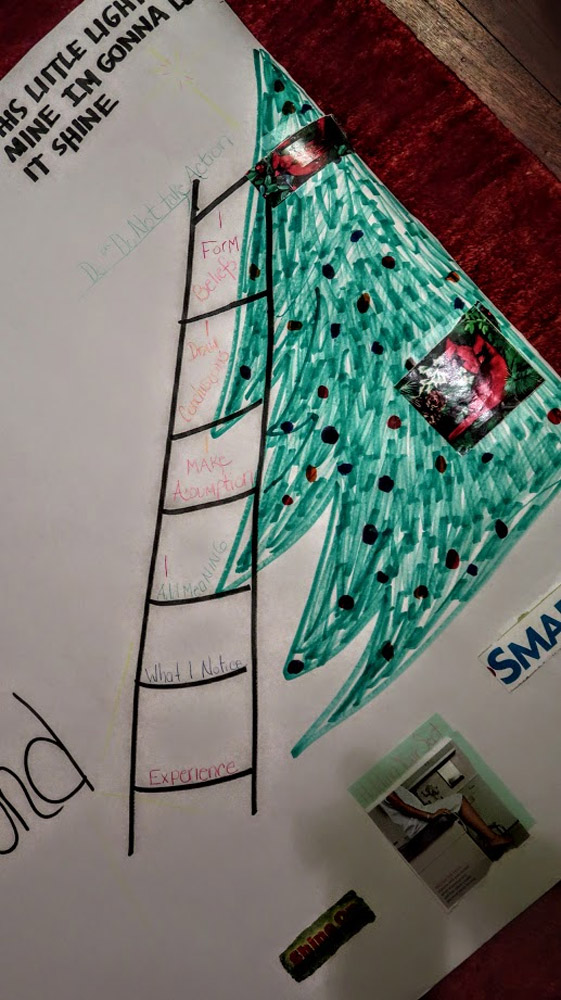 Brilliant! The 12 Days of Christmas (according to my wonderful group): 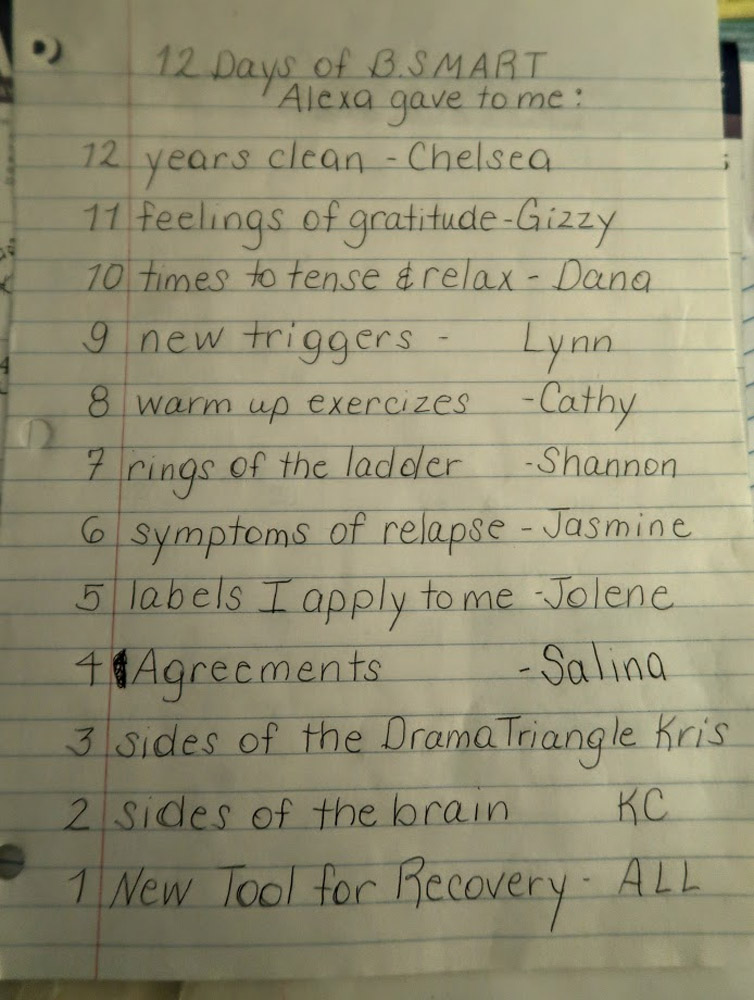 I was showered with gifts- expressive artwork highlighting  our course content,  messages of gratitude and love. What can I say? I am deeply moved and an honored to have had the opportunity to learn from these ladies. They trusted me enough to share their stories, anxieties, concerns, losses, hopes and dreams. I feel very fortunate and grateful to have had this time with them and wish them a better and brighter future. I hugged each one of them. May they feel at ease, may they be happy, healthy, safe and at peace.

Special thanks to Luis Gomez, Master Laughter Yoga Trainer from Mexico City, who through his prison work and his documentary “Soy Libre”, inspired me to volunteer within the prison system and who greatly encouraged me to take on this project.  Thanks also to La Vonne Alexander, Case Manager, Crisis Intervention Consultant/Counselor and WRAP Facilitator, who collaborated with me to develop the B.SMART Program at Chester County Prison.

This website uses cookies to improve your experience while you navigate through the website. Out of these, the cookies that are categorized as necessary are stored on your browser as they are essential for the working of basic functionalities of the website. We also use third-party cookies that help us analyze and understand how you use this website. These cookies will be stored in your browser only with your consent. You also have the option to opt-out of these cookies. But opting out of some of these cookies may affect your browsing experience.
Necessary Always Enabled
Necessary cookies are absolutely essential for the website to function properly. This category only includes cookies that ensures basic functionalities and security features of the website. These cookies do not store any personal information.
Non-necessary
Any cookies that may not be particularly necessary for the website to function and is used specifically to collect user personal data via analytics, ads, other embedded contents are termed as non-necessary cookies. It is mandatory to procure user consent prior to running these cookies on your website.
SAVE & ACCEPT
Go to Top